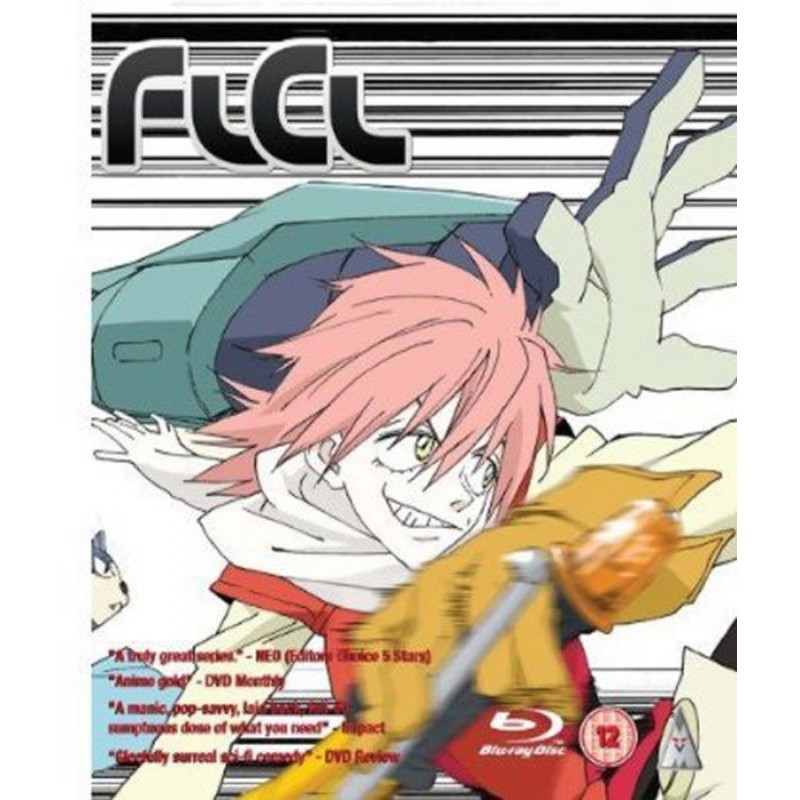 The series is Produced by GAINAX (Neon Genesis Evangelion) and animated by Production I.G. (Ghost in the Shell), FLCL takes animation to yet another level. Get ready for this shocking, funny, and right out freaky show about adolescence, expectations and alien intrigue.

Naota wants to be normal. But with a talented brother leaving Japan for the US to play baseball, everyone now looks at him a bit differently. His brother's girlfriend is acting strange and now there's an even stranger girl hitting on him.
Literally.
With a bass guitar.

Oh, did I mention the robots that keep springing from his head?

The time: the present... perhaps.
The place is an outlying city called Mabase, from which grows the gigantic Medical Mechanica plant.Nandaba Naota, a smart-aleck schoolkid, gets sideswiped by a Vespa on his way home with his brother's girlfriend, Samejima Mamimi.When he gets home from school the next day, he finds the woman on the Vespa from the day before in his living room. Naota is stunned as he listens to his father explain that he has just hired her as their new housekeeper. She tells him her name is Haruko.Naota doesn't know how to react to the fact that he and Haruko are suddenly living under the same roof.And then there's the mysterious robot that suddenly appears before Naota when he goes out into the night for Mamimi.Things get strange very quickly...