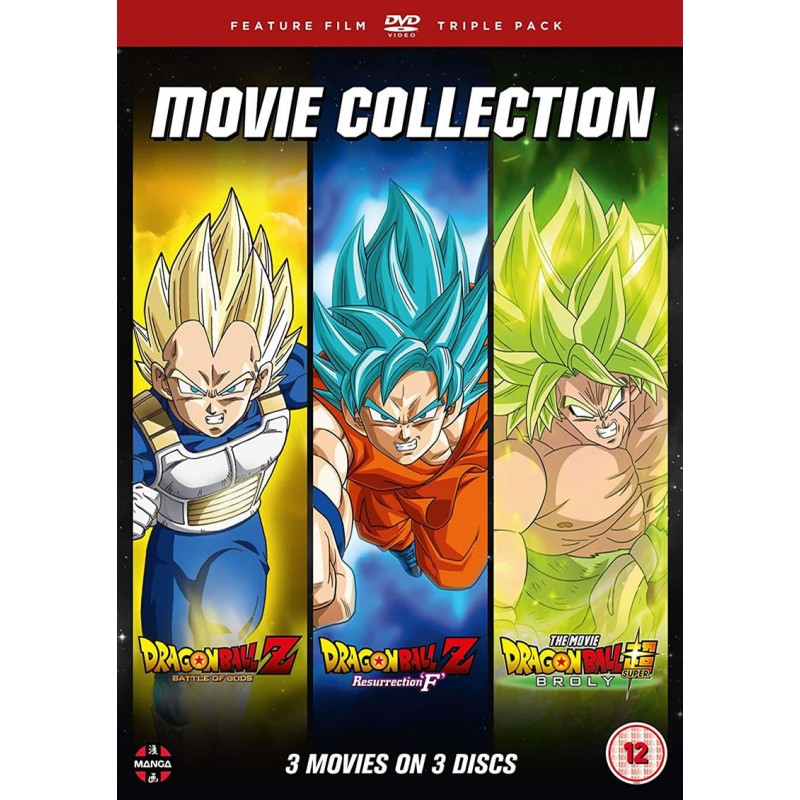 Dragon Ball Super: Broly is the third film personally supervised by the series creator himself, Akira Toriyama. The new movie showcases the canonical introduction of Broly, the legendary Super Saiyan.

Battle of Gods:
Following the events of the Dragon Ball Z series, after the defeat of Majin Buu a new power awakens and threatens humanity. Beerus, an ancient and powerful God of Destruction, searches for Goku after hearing rumours of the Saiyan warrior who defeated Frieza. Realizing the threat Beerus poses to their home planet, the Z-fighters must find a way to stop him before it’s too late. Only Goku, humanity’s last hope, can ascend to the level of legendary Super Saiyan God and stop Beerus from destroying Earth, and possibly the entire universe!

Resurrection F:
Even the complete obliteration of his physical form can’t stop the galaxy’s most evil overlord. After years in spiritual purgatory, Frieza has been resurrected and plans to take his revenge on the Z-Fighters of Earth. Facing off against Frieza’s powerful new form, and his army of 1,000 soldiers, Goku and Vegeta must reach new levels of strength in order to protect Earth from their vengeful nemesis.

Broly:
This is the story of a new Saiyan.

Earth is at peace after the Tournament of Power. Goku, knowing that there are ever-stronger forces in the universe he has yet to encounter, spends all of his time training to achieve another level. One fateful day, a Saiyan appears before Goku and Vegeta who they have never seen before: Broly. How can a Saiyan - who had all supposedly been annihilated after the erasure of Planet Vegeta - appear on Earth? With the return of Frieza from hell, a fierce battle awaits these three Saiyans who have followed completely different destinies.

The box office smash hit can now be added to your collection - the new movie from the global phenomenon series is now one of the only anime films to ever reach £1m at the UK box office.